Making yet another Internet Radio project with Raspberry Pi

For years I've been using my old looking replica of Bush TR82 radio to listen our local radio stations, but recently I decided to push its reception limits a bit further and upgraded it with help of Raspberry Pi to an Internet Radio.

So, with some extra components from a few broken things now it looks like this:

Actually, it is not just a radio anymore - it is a weather station as well :) It monitors and displays current temperature, pressure and relative humidity. Why? Just because after connecting screen and control buttons I still had a few IO pins available plus it will help me in future to build intelligent house heating system

If radio is in Internet mode, screen is highlighted by blue LEDs (used to be Logitech G-15 keyboard).

Control buttons (used to be Canon 300D camera) allows to select different radio stations from a play list or to bring up control menu with  some system info (CPU load and network transfer rate):

There is also a simple CLI to control some functionality remotely or to get sensors reading: 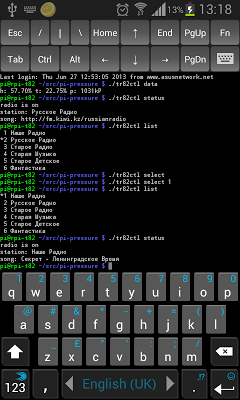 Rear side has a window for Temperature/Pressure/Relative Humidity sensors:

The window is covered with a mesh which used to be office paper holder.

Raspberry Pi itself is located in radio's battery compartment:

Flat cable connects RPi to a board fastened inside to top of the battery compartment:

Front panel with a bit of hot glue and insulation tape to hold screen and buttons:

List of main components used:
A bunch of small components: buttons, resistors, optocoupler to detect Radio/Internet mode, LEDs, transistor to drive LEDs, small sockets and cables - mainly salvaged from different broken appliances I kept in the attic for occasions like this :)

Third party software:
Everything glued together by C with a bit of C++ extensions to a single thread. Control buttons monitored by poll() with 100ms timeout used to increment all sort of counters. Nokia screen sits on SPI interface, nothing fancy there, standard RPi Linux SPI driver is used. To read RHT03 humidity sensor instead of tight loop polling I'm using interrupt handler.